Relevant information about lipoabdominoplasty differences between liposuction, abdominoplasty and mini tummy tuck scar, results, complications, and everything about it.

The lipo-abdominoplasty is indicated for patients who have localized fat in the abdomen, associated with abdominal skin laxity.

Anesthetic type:
General anesthesia, the epidural can be used in specific cases.

The length of stay:
Usually 24 hours, depending on the recovery and Dr. El Hachem judgment.

Postoperative:
The patient is left with an abdominal drain for a few days and it will be removed as directed by Dr. El Hachem according to the daily drained volume. The tube serves to drain the fluid that forms beneath the skin, preventing it from accumulating (seroma) to facilitate healing and faster recovery.
Avoid all efforts and remain in bent position for up to 10 days to avoid tension of the scar. Heavy physical exercise should be avoided for at least 3months.

You should use a garment for at least 1.5 months, or for longer period depending on the evolution process. Dr. El Hachem advises that ultrasound and lymphatic drainage sessions are carried out, after 7 days of surgery, in order to avoid the accumulation of local fluid, and inducing resolution of edema and internal scarring.
The scar usually becomes red for a few months, tending to clear up from 6 months to a year, depending on skin type and genetics of the patient.

However, when the surgical indication is accurate and a well-performed surgical technique with adequate postoperative follow-up with Dr. El Hachem, complications are rare.

Because most complications are seen in smoking patients, they should abstain from cigarettes for a month before the surgery to minimize the risks.

The final results of lipo-abdominoplasty are reached 6 months after surgery, the time required for the accommodation of tissue and maturation of the scar. 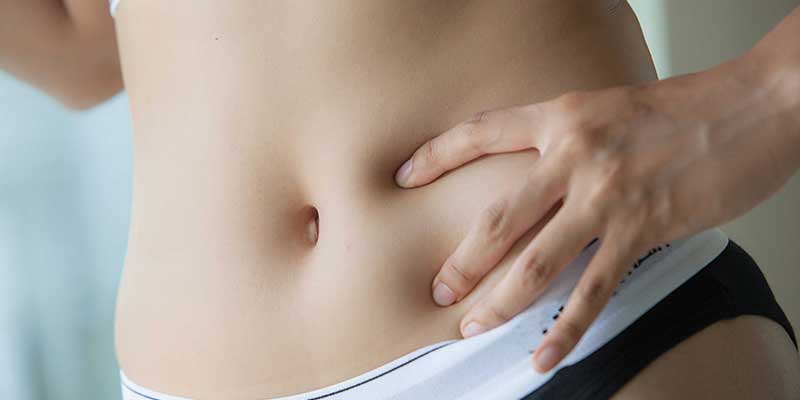 1) How much weight will I lose with Lipo-Abdominoplasty?
As surgery that removes a certain amount of skin and fat will definitely allow a reduction in body weight, which varies according to the volume of your abdomen. According to Dr. El Hachem, its not the removed “kilos” that defines the overall aesthetic result, but the harmonic proportion between the abdomen and the rest of the trunk and limbs. Paradoxically, the abdomens that have better aesthetic results are precisely those with smaller removal.

2) Does Lipo-Abdominoplasty leave any visible scars?
The resulting horizontal scar from a lipo-abdominoplasty is located horizontally just above the pubic hair, extending laterally to a greater or lesser extent, depending on the volume of the abdomen to be fixed. Dr. El Hachem insists that the scar is planned to be hidden under the bathing suits, and inevitably will pass through several stages of evolution until resolving.

3) When will I recognize the final result of the Lipo-Abdominoplasty?
In the first months, the abdomen shows some insensitivity, and is subjected to periods of “swelling” that resolves spontaneously. Over the months, with the lymphatic drainage and improvement of the swelling, you will gradually be reaching the final outcome. You should never be seeking a definitive result, before 6 months postoperatively.

4) Is it true that there will be a new navel in Lipo-Abdominoplasty?
No. Your own navel will be reinserted and, if necessary, remodeled. One should take into account that, surrounding the navel there is a scar that will suffer the same evolution as the scar below. Because it is a circular scar in some cases the changes may not be the one you would want, resulting in a “artificial” scar. This is secondary to the evolution of scar in certain skin types, which, however, is likely to be fixed, by “retouching” under local anesthesia, after a few months.

5) Does Lipo-Abdominoplasty correct that excess fat on the stomach region?
Yes. Liposuction on this area removes the localized fat, whereas abdominoplasty buckles muscle belt, gives a flatter appearance and slims the abdomen.

6) Can I have children in the future? Will the result not be harmed?
A new pregnancy will cause the abdomen to stretch the skin which would partially compromise the result. The return of fat is related to the diet of the patient, because as before surgery, the excess calories will be stored as fat in the abdomen and other body parts. Dr. El Hachem advises you that you have all the children programmed before undergoing a lipo-abdominoplasty.

But on the medical point of view, there are no problems conceiving, presenting no health risk to the mother or child in any future pregnancies.

7) I heard that the Postoperative Lipo-Abdominoplasty is very painful. Is it true?
A lipo-abdominoplasty can present certain painful stimuli, but several types of medicine will be used to effectively control the discomfort. Due to the detachment of the abdominal skin, it is more common not to feel pain in the lower abdomen area, because this area will have some nerves removes, which prevent the painful stimulus.

8) Is there danger in Lipo-Abdominoplasty surgery?
Dr. El Hachem reassures that lipo-abdominoplasty surgery has rarely any serious complications, when it is held within technical criteria. This is because of the proper preparation of each patient for the surgery, as well as taking into considering the suitability of the surgery for the patient.

9) What type of anesthesia is used for abdominoplasty?
Usually general, can be epidural anesthesia.

11) How long is the hospital stay for?
1 day (normal evolution).

12) Is a drain used in Lipo-drain Abdoninoplastia?
Yes. Dr. El Hachem explains that the drain remains for about 3 to 6 days depending on the amount of drained secretion.

13) When are the stiches of Lipo-Abdominoplasty removed?
From 7 to 15 days.

15) What is the Postoperative evolution of Lipo-Abdominoplasty?
One should not forget that, until it can achieve the desired result, several phases are characteristics of this type of surgery. Dr. El Hachem will answer any doubts on the evolution of the abdomen form, as well as sensitivity, consistency, etc. Be patient, because your body will take care to eliminate all small inconveniences that inevitably draw the attention of some of your friends who do not refrain from saying: “when will this disappear?” – Obviously any concern on your part will be transmitted to Dr. El Hachem who will give the necessary explanations for your tranquility. Some patients will develop some anxiety at this stage due to the transitory aspect (edema, insensitivity, scar transition, etc.). This is temporary and usually reflects the desire to achieve the final result as soon as possible. Remember that no result of abdominal surgery should be considered definitive before 6 to 12 months.

16) Can you associate other plastic surgeries to Lipo-Abdominoplasty?
Yes. It is frequently associated with breast reduction or breast lift. The ability to associate more plastic surgeries will be assessed by Dr. El Hachem in view of the extent of the surgery.

17) Can you operate the Lipo-Abdominoplasty and the cesarean section at the same time?
Dr. El Hachem does not recommend it! The risk of thrombosis and infection is higher in the association of gynecologic and plastic surgery. Another reason is because the association would be uncomfortable postoperative for the mother, who would have to recover from the plastic surgery and breast-feeding at the same time.

18) How long after the cesarean section can the Lipo-Abdominoplasty be done?
Ideally after 6 months as the patient would have already returned to normal weight, stopped breastfeeding, which would facilitate a better recovery.

19) What happens with the scar of C-section?
The lipo-abdominoplasty removes the scar of caesarean section, meaning that the patient is left with only a scar below the abdomen after surgery.

20) What is a Mini – Abdomen surgery?
The mini tummy tuck is a surgery that removes less skin than classic abdominoplasty. Since the skin removal procedure is smaller, the scar will also be smaller in size. It is advised only for patients with minimal excess skin below the navel and little abdominal flab.

1) Communicate with Dr. El Hachem up until two days before the operation, in case of flu or illness.

2) Arrive at the hospital indicated according to schedule.

3) Avoid any alcoholic beverages or large meals the day before surgery.

4) Avoid any medication for weight loss that you may be using, for a period of 14 days before the surgery. This also includes diuretics.

5) Schedule your social, domestic and school activities so not to become indispensable for a period of approximately 20 days after the operation.

6) Avoid smoking for at least fifteen (15 days) prior to surgery.

7) Keep fasting eight (8) hours before the scheduled time of surgery.

8) Avoid any medication containing acetylsalicylic acid (ASA, aspirin, etc) or any medication with an anticoagulant effect at least 7 days prior to surgery.

2) Avoid wetting the dressing during the first phase (2 days).

3) Walk with a slight posture (bent) and maintain short steps, for a period of 15 days. At bedtime place pillows behind your back and below the knees, leaving the abdomen without tension.

4) Avoid any medication containing acetylsalicylic acid ( aspirin, etc.) or any medication with anticoagulant effect at least 7 days after the surgery.

5) Have a normal diet (except in special cases).