Informations about plastic surgery of the arms, the arms brachial dermolipectomy, arm liposuction, scarring, recovery, results, complications, everything about it.

Indication:
After major weight loss, alternating periods of gain and weight loss, or over age, flaccid bulging of the posterior arm portion is common. Dr El Hachem affirms that this is due to excess skin formed by stretching during overweight period or loss of turgor of the skin due to age. Having the back skin of the arm relatively thin, it does not contract enough after weight loss, resulting in excessive local skin. Brachial dermolipectomy (brachioplasty) aims to remove this excess skin, providing an outline of the most natural and less flabby arm.

Postoperative:
The patient should avoid excessive movements, particularly raising arms for 30 days since the scar is in the armpit as well as inside of the arms and would be strained in these cases. The lower the traction on the scar, the lower its enlargement.

Complications:
Among the possible rare complications, are the following: hematoma, seroma, infection, dehiscence (opening of the suture), keloids, abnormal sensitivity.

Definitive result:
The final result of the arm dermolipectomy is reached only 6 months after surgery, which is the time required for the accommodation of tissue and maturation of the scar (can take up to 12 months for the scar to clear). 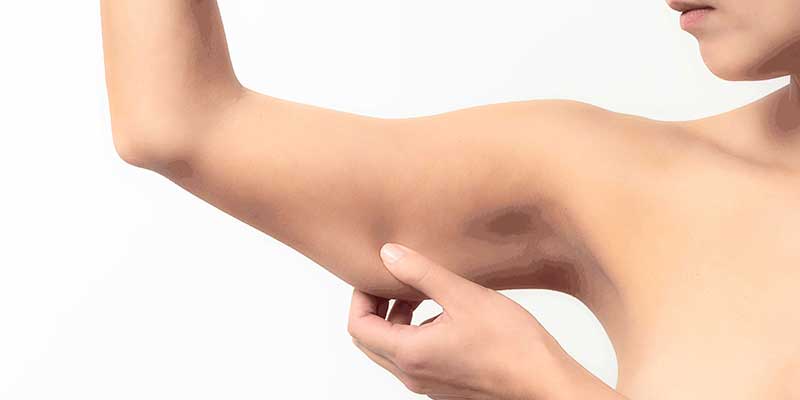 1) Does surgery of the arms leave very visible scar?
The scar of a brachioplasty is located next to the arm axillary fold (armpit fold). When there is a large excess of skin, may also be required a vertical scar extending in the inner aspect of the arm, which present greater or lesser extent depending on the skin excess to be corrected.

2) How is the development of the scar?
The scar goes through several stages, to get to maturity. It will be less noticeable with time.

a- IMMEDIATE PERIOD: Up to the 30th day and present with a barely visible scar.

b- INTERMEDIATE PERIOD: From the 30th day to the 6th month. In this period there will be a natural thickening of the scar, as well as a change in its color, from “red” to “brown”, which will gradually brighten. Healing evolution in this period is less favorable. Since we cannot speed up the natural healing process, Dr. El Hachem recommends patients not to worry because resolution of the scar remains until the last phase. In this phase it is important not to sunbathe on the scar so that it doesn’t change color.

c- LATE PERIOD: From the 6th to the 12th month. In this period, the scar begins to become clearer and less consistent, thus reaching its final appearance. Any assessment of the final outcome of the surgery should only be made after this period.

3) Does brachioplasty correct the excess fat located in the region?
Depending on the case, liposuction at the site may be associated with the arm dermolipectomy of arms to remove more fat.

4) Is there danger in this operation?
Rarely does brachial dermolipectomy have serious complications, since it is done within technical criteria. This is because Dr. El Hachem properly prepares each patient before surgery, as well as he considers every surgery according to the appropriateness of each individual.

5) What type of anesthesia is used for this operation?
Usually local with sedation.

6) How long does the surgery take?
On average 2 hours.

7) What is the hospital stay?
One day (normal evolution).

9) When are the stitches removed?
When there are points to be removed, usually in about 7 to 15 days.

10) What is the postoperative evolution?
You should not forget that, until it can achieve the desired result, several phases are characteristic of this type of surgery. However, it may be of some concern to achieve the desired final result ahead of schedule. Be patient, because your body will take time to dispel all small indiscretions that, inevitably draw the attention of some of your friends who do not refrain from saying: ” Will this even will disappear ” – Obviously any concern on your part should be transmitted to Dr. El Hachem who will give you the necessary explanations for your tranquility. Some patients will develop anxiety at this stage, due to the transitory aspect (edema, insensitivity, scar transition, etc.). This is temporary and usually reflects the desire to achieve the final result as soon as possible. Remember that any results should not be considered definitive before 6 to 12 months.

11) Is it possible to associate arms dermolipectomia with other Plastic Surgeries?
Generally, yes. It is frequently associated with liposuction, breast lift, tummy tuck or other plastic surgery.

12) What does dermolipectomy stand for?
Dermo = skin; Lipo = fat; Ectomy = withdrawal. Thus, brachial dermolipectomy means removal of skin and fat from the arms.

1) Communicate with Dr. El Hachem until two days before the operation, in case of flu or illness.

2) Arrive to the indicated hospital prior to the scheduled operative date.

3) Avoid alcoholic beverages or exaggerated meals the day before surgery.

4) Avoid any medication for weight loss that the patient may be using, for a period of 21 days before the surgery. This also includes diuretics.

5) Schedule your social, domestic or school activities so as not to become indispensable for a period of approximately 21 days.

6) Avoid smoking for at least 30 (thirty) days prior to surgery.

7) Keep absolute fasting for eight (8) hours before the scheduled time of surgery.

8) Avoid any medication containing acetylsalicylic acid (aspirin, etc.) or any medication with an anticoagulant effect at least fifteen (15) days prior to surgery.

1) Avoid raising and opening arms for 30 days, so there is no excessive traction on the scar located in the armpit and arm.

5) Avoid any medication containing acetylsalicylic acid (aspirin, etc.) or any medication with anticoagulant effect at least fifteen (15) days after the surgery.