Indication:
Liposuction is a surgical procedure that reduces the volume of the body fat, in localized area, giving the patient better body contour. The purpose of this procedure is not losing weight, but shaping the body silhouette.
The best results are obtained in the areas of localized fat because liposuction of large areas and large volumes are more likely to leave irregularities.
In the case of liposculture, part of the suctioned fat is used to fill areas that need fat graffting (Face, buttock …)

Hospital stay:
Dr. El Hachem advises that the patient stay from 12 to 24 hours, depending on the size of the liposuction.

Postoperative:
Generally, there is edema (swelling) and ecchymoses (bruises), which resolve by themselves in 21 days for most cases.

During the first month after the liposuction, the patient has noticeable improvement of edema, with hardening felt in the operated area, resulting from internal scarring. This hardening progressively improves during the 2nd and 3rd months, time in which further retraction of the skin occurs. An elastic garment should be used for 3 months and lymphatic drainage and ultrasound are indicated from day 7 after the surgery, in order to speed recovery, reduce swelling and hardening.

Complications:
Complications are rare in liposuction, but they should be mentioned: hematoma, seroma, irregularities, infection, thrombosis, injury during surgery and anesthesia problems.

The seroma, the most common complication in large liposuctions, is the accumulation of clear fluid in the operated area. In these cases, Dr. El Hachem can proceed through punctures to empty these seroma, leading to resolution of the problem without prejudice to the outcome.

Final result:
The final result of liposuction takes place after 6 months, but it gets to 80% at 4 months. 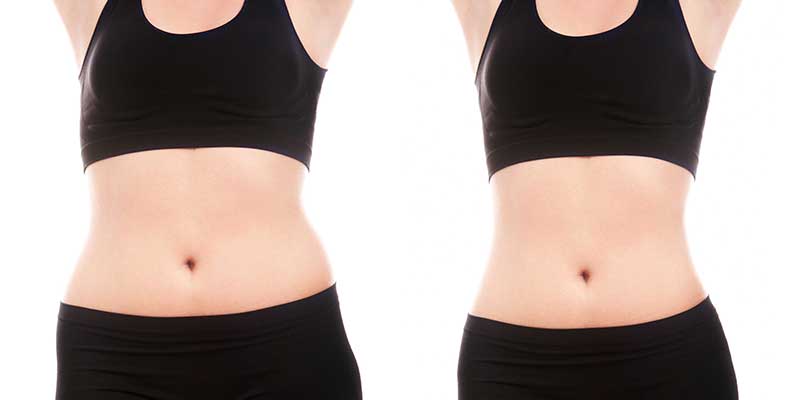 1) Who makes a good candidate for liposuction?
• Patients with localized fat which are in ideal weight or close to it, because liposuction is done to shape the body silhouette and not to lose weight.
• Young patients with elastic skin, as liposuction does not remove the skin excess and the remaining skin after surgery depend on the skin retraction capability.

2) In which regions of the body can liposuction be operated on?
Liposuction is performed for the removal of localized fat and can be performed in a natural fat accumulation sites such as the abdomen, flank, back, legs, arms, and neck.

3) What is the difference between liposuction and liposculpture?
Liposuclpture is a liposuction in which the removed fat is purified, concentrated and used as a graft to increase or shape other body parts, such as buttocks, facial wrinkles, skin depressions, etc.

4) What type of anesthesia is used?
Depending on the amount of fat and extent of liposuctioned area; It can be the local with sedation, or general.

5) Will the scars be large?
The scars from liposuction are very small, 5 to 10 mm, and are placed in hidden areas such as under the bikini, in the belly button or in the breast crease. They are usually of good quality, and hardly noticed.

6) How long does the surgery take?
It depends on the extent of the liposuctioned area and the amount of fat to be removed. It can last from one to four hours.

7) How long is the hospital stay?
It can be between 12h and 24h, depending on the size of the surgery.

9) How long should I wear the garment postoperatively?
The compression garment should be used for 3 months after surgery.

10) Is the post-operative recovery very painful?
Each patient has different pain threshold . The feeling most commonly referred to is the discomfort of the swelling and pain when pressing the operated area, but easily treated by simple painkillers that will be prescribed.

11) How is the sensitivity of the operated area?
When the liposuction cannula sucks the fat, it shaves in small nerves that give sensitivity in the region. Therefore, there is a change in local sensitivity due to trauma after liposuction, which tends to return gradually with time.

12) How is the post-operative recovery of Liposuction?
The patient leaves the operating room with a new profile, but this is obscured by edema (swelling). The edema and ecchymosis (bruising) are more intense during the first three weeks, with gradual resolution. A residual swelling is kept up to the fourth month.
At the end of the first month, there will be better absorption of the edema, with emergence of hardened nodules and areas due to fibrosis (internal scarring). These will generally improve from the second to fourth month. The retraction of the skin occurs from the third to sixth month after Liposuction and its intensity depends on skin quality.

13) When are the stitches removed?
The stitches are removed from day 7 postoperatively.

14) When will I reach the final result of Liposuction?
After the sixth month postoperatively.

15) When can I return to normal activity?
Dr. El Hachem reassures you that all activities may be resumed as soon as the discomfort vanishes. For professional activities usually 5-7 days. Physical activities take longer. In the case of a small liposuction (less than 1 liter with local anesthesia), the recovery is faster, and can be return to daily activities almost immediately.

16) When can I do exercise?
It depends on the size of Liposuction and may take one to two months.

17) What is the risk of complications from liposuction?
Possible complications are hematoma, seroma (accumulation Serum), infection, thrombosis. All of them are rare, especially if liposuction has been performed by a well-trained plastic surgeon.

19) Can Liposuction be done before becoming pregnant?
Liposuction does not affect pregnancy, because it only removes fat. It is common, however, the confusion between liposuction and abdominoplasty, which removes the abdomen skin and this is usually not performed before the planned pregnancies.

20) In the case of getting pregnant after liposuction, will I lose the result of the surgery?
The question of gaining weight depends only on the patient and his diet and habits.

22) It is necessary to have postoperative drainage?
Dr. El Hachem advises that Lymphatic drainage helps to reduce edema (swelling) and to prevent the accumulation of fluid beneath the skin, being very important in the recovery of liposuction.

23) What is “minilipo”?
The “minilipo” or “lipo-light” is nothing more than a liposuction with local anesthesia. This is the liposuction of parts of the body, instead of making all parts. As the result, it is riskier, because the chance of having irregularities and discrepancies between the liposuctioned parts performed on different days is greater than one liposuction. To be under local anesthesia, no sedation, the patient often suffers pain and the procedure ends up not being performed adequately.

24) Is “Minilipo” safer than traditional liposuction?
This is not true! To have it done in office, the risk of infection is higher and the safety of medical devices are much less than a surgical center. Moreover, doing several sessions, multiplies the risks several times. Most worrying is that most doctors who do the “minilipo” or “lipo-light” are not plastic surgeons, meaning that they are not experts, which greatly increases the risk of complications.

1) Communicate with Dr. El Hachem until two days before the operation, in case of flu or illness.

2) Avoid alcoholic beverages or exaggerated meals the day before surgery.

3) Avoid any medication for weight loss, for a period of 14 days before the surgery. This also includes diuretics.

4) Avoid smoking for at least fifteen (15 days) prior to surgery.

5) Keep fasting eight (8) hours before the scheduled time of surgery.

6) Avoid any medication containing acetylsalicylic acid (ASA, aspirin etc..) or any medication with anticoagulant effect at least seven (7) days prior to surgery